Actually, wanton noodles are more commonly known as ‘Ba Mee’ in Thailand and if you are particular about your wanton mee, you’ll realize there are a couple of differences.

Serving size apart (rarely do I finish my noodles but I had no problem in Bangkok because the serving is really tiny), the wantons are a lot smaller – but they are packed with flavors. Noodles-wise, we are used to have our noodles drenched in black/chili sauce so they end up being a little nuah. In comparison, Bangkok’s version is drier so the noodles are more chewy and goes really well with their chili flakes/pepper!

There are two popular stalls for Ba Mee; one in Pratunam (i.e. Sabx2) and another in Chatuchak.

Who does it better?

If you are staying in the Pratunam area (the popular hotels are Glow, Amari Watergate and Grand Diamond), Sabx2 can’t be more accessible. It’s less than a 5-minute walk and it’s not difficult to spot their huge store front. Getting seats during the peak hours, especially lunch, may be a challenge though. We highly recommend coming here for breakfast!

Portion is small so not to worry if you are not the sort who have heavy breakfast.

I know the wantons look big in the photo above but trust me, it’s because it’s relative to the portion of noodles. Guys may need at least two bowls if they are here on a hungry stomach but we’ll advise to order their pig trotters to fill those tummies instead because apparently they are really good. Probably better than their wanton noodles 😉

Ever since a friend recommended this hidden gem to me a few years back, this is my MUST-HAVE whenever I return to Bangkok. Yes, all the way to Chatuchak just for this! It’s really difficult to tell you the exact location of this stall but if you comb Section 2 Soi 40 aisle by aisle, you will see it. It’s tucked between clothing stalls so it would definitely stand out.

Seating will be an issue at all times of the day because the stall is really small. If you are here in a big group (i.e. >5), you’ll probably need to split up and take whatever seats available. 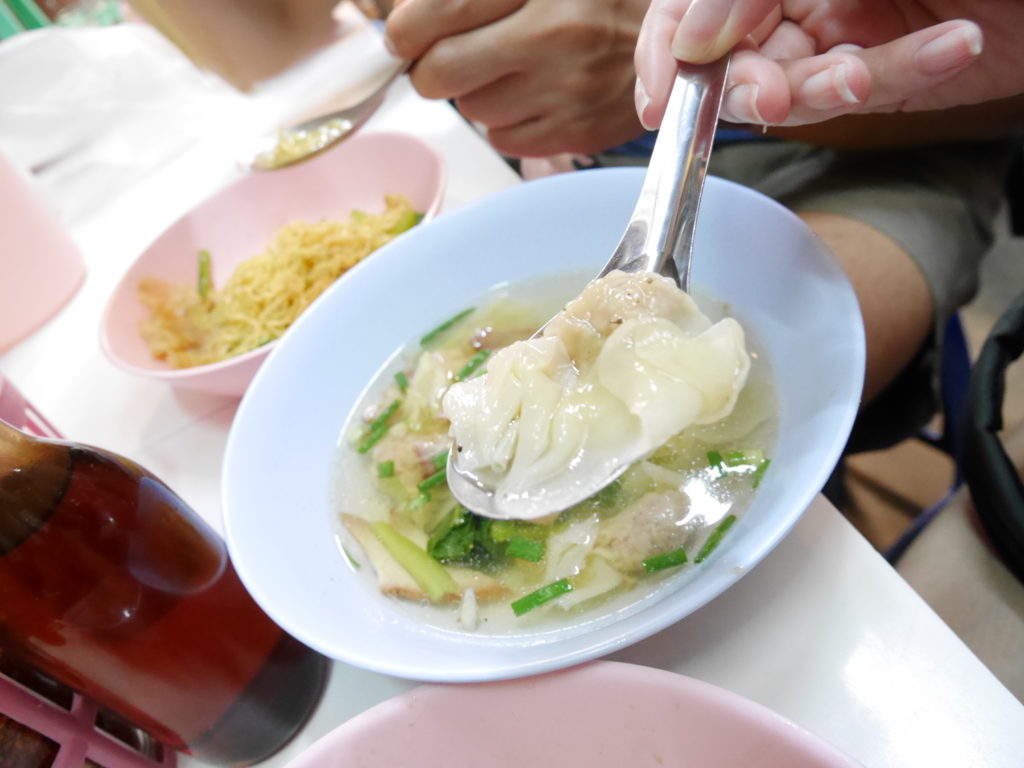 I know the noodles look plain and the char siew doesn’t look as roasted as the ones we see back in Singapore. However, the taste is unforgettable. I rarely enjoy the soup version of wanton mee but the noodles are so good that I finished one soup + one dry version all by myself – and I wasn’t even hungry.

There’s something about the noodles at the Chatuchak stall because it doesn’t even taste egg-y (if you get what I mean). Coupled with chili flakes and the cooked-to-perfection wantons (the skin is neither too soft or too hard + there’s a peppery kick to the meat), there’s no doubt that the wanton noodles at Chatuchak takes the cake.

Plus – it costs half the price of the Pratunam version. 😀

Tell us what you think!