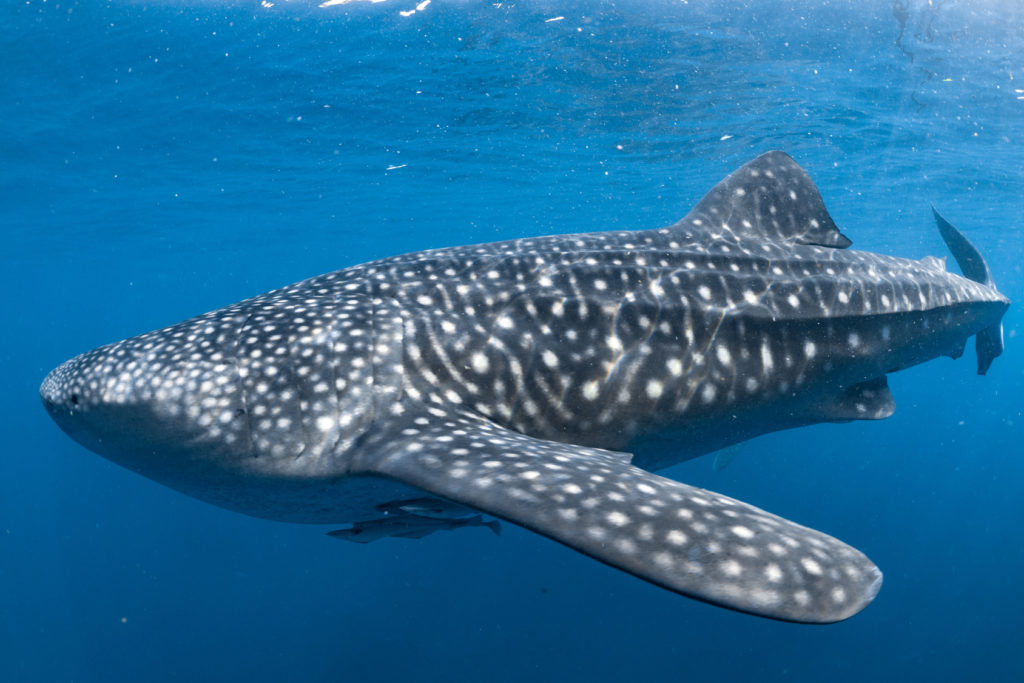 Gentle giants of the sea, the whale shark is the largest fish in the world. The largest whale shark was 12.2 metre long — that’s the average length of a transit bus! Slow and gentle, whale sharks are filter feeders and are not dangerous at all.

Whales sharks live in tropical seas and they move in mysterious way. Scientists discovered that whale sharks take surprising “road trips” to faraway destinations, for reasons unknown. We’re pretty lucky in Asia Pacific — for there are some places that these gentle creatures mostly hang out at.

Remember: Maintain no less than 3m to a whale shark, and do not interfere with their direction of movement. Strictly no touching, of course. Whale shark encounters happen mysteriously and unexpectedly, so many dive shops would instruct snorkels on for quick jump in, rather than scuba, to swim with the whale sharks.

From November through June, with peaks in February and May, whale sharks visit the bay. Donsol is known as the “Whale Shark Capital of the World”, though they have been spotted at many of the country’s dive sites too. Philippines is renowned for its pristine dive sites, and despite its popularity, whale shark tours are stunningly affordable. Whale shark watchers will have to snorkel, as scuba is not permitted.

If you’re a diver and want to pair your dives with whale shark watching, head to Palawan’s Puerto Princesa. Recommended travel period is from April through November where the sea is the calmest. Between dives, your dive boats roam the ocean for whale sharks, then hustle you into the water with a snorkel upon spotting one. The trips can be customised specifically for whale shark spotting too — simply arrange with a dive shop for a locally guided tour.

For intermediate and experienced divers only, the Richelieu Rock is a unique dive site in the Andaman Sea where a rock pinnacle dips to a depth of 50 meters towards the ocean floor. From February through May, whale sharks have been sighted regularly, more so from 2013 to 2016. Dive shops highly recommend liveonboard for a higher chance of spotting whale sharks.

The Maldives Archipelago is the shrine of all ocean, for scuba diving and snorkelling. Its strong currents carrying in plankton-rich water makes the most desirable breeding ground for whale sharks. From December through April, head to the eastern side of the islands for spotting of these magnificent creatures, and to the west from May through December. Extensive guidelines have been drawn up for conservations, so there will be fewer boats and fewer snorkelers underwater.

One of Indonesia’s best kept secrets, Cenderawasih Bay is located on the northern coast of Papua to the far east of the archipelago. Local fishermen sift small baitfish from floating platforms and there, whale sharks linger to feed. The place retains its charms as sharks and fisherman coexist in harmony.